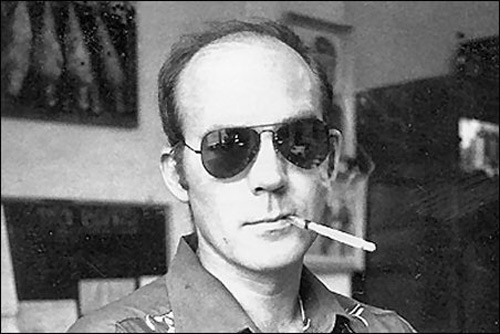 Not because he was a literary genius, or because the book was so funny I couldn’t read three pages without laughing hard.

I realized long before I got to the end that I wanted to know how much of this story was true and what was made up. How far did he really go before he started typing? Where did reality end before Hunter’s imagination began?

The book itself was a page turner, and the story behind it had me obsessed.

Around the same time I began to apply the same concept to my sales calls. What if I could create enough curiosity in a prospect that they’d take an initial demo? What could I do on a demo that would make them truly want me to keep going?

Most sales reps are focused on developing other things. Rapport, interest, buy-in. Are these things important? Absolutely.

However, there each one of those is missing something crucial. They’re all missing a human element. Something that compels a prospect to want you to keep going because they want to know what’s going to happen next.

That human element was something I had found in Thompson’s writing, which was finding it’s way into my sales conversations.

What do I mean by a human element? Let me give you some examples as to questions sales reps often ask that lack the human element:

“How do I give the best pitch?”

“What do I say when the prospect says they’re not interested?”

“How can I make a one call close?”

“What email trigger is going to get the prospect to say yes to a half hour meeting?”

None of these questions address one key thing:

What would the prospect love to know more about?

They’re all about how the sales rep makes the call and gets the result. Me me me me me!

Good question to ask: Who ends up making the buying decision, you or the customer?

Notice I said buying decision, not selling decision. Customers are the ones who buy things.

So why are we so damn focused on how do we make the people we want to buy from us do the things we want them to do? Why not focus on enabling them to make a smart decision around what we have to offer?

Yes, it’s frightening to think this way at first. Once you realize that’s the way it already is, the concept becomes a bit easier to swallow.

That first step down the process is driven by one of two things. Either the prospect is actively seeking to make a change, or the prospect is open to learning more about alternative ways of doing things.

Think about it for a moment if you don’t agree (skip this paragraph if you get it). When someone tells you about a solution that can help you out, unless you have a fully developed need, like a burning need where you need it fixed right this second, are you going to go buy it? No, you aren’t.

Therefore if you’re doing outbound prospecting of any kind, you’re going to encounter a lot of people who are open to learning more but aren’t actively seeking to make a change yet.

With that in mind, let’s take a step back and talk about what the purpose of a prospecting call is.

The goal of a prospecting call is to
1) Start to understand the prospect to see if your product or service can help them.
2) If it can, create enough interest so the prospect chooses to learn more.

Most training is focused on the first part, getting to know someone. In fact, a lot of sales advice is around rapport building, developing a relationship, and digging deeper into a prospect’s needs, wants, and desires.

So little sales training focuses on creating a conversation that the prospect actually enjoys being lured, even seduced, into having.

What’s missing is the soft skills that help you get the prospect curious enough to take the first step in the process.

It’s skipping over how to create enough curiosity that your prospect is actually engaged on your demo.

Too little is focused on the setting up and unveiling your proposal so the prospect is captivated, intrigued, and pleased.

Instead everyone wants to talk about the methodology on how to pitch a prospect on your first call. How to ask questions, likely after regurgitating 20 minutes of memorized product knowledge. Then how to negotiate price because the prospect doesn’t see the value in what you have to offer.

It’s not a coincidence that performance means both entertainment and results.

Prospects don’t want to be sold to, they want to go for a ride. No matter what happens they want to walk away with a story to tell, because that’s what everyone else will want to hear.

The first step is getting them curious.

You might be asking yourself, how do you define curiosity on a sales call?

Here’s how I think about it as a question a prospect would feel: “How are they going to do what they said they can do?”

That question has a bit of suspense and desire to it. Enough for the prospect to want to see what happens next.

If your goal is to set up an initial sales call to truly introduce your product, how can you create a sense of curiosity?

Biggest mistake I see is when a rep tries to dig into the product a lot in that first call. Why is that? Because if you give the prospect just enough information, often times they think they understand everything about your product and can easily say, “nah I’m good, thanks, I get it though!”

Seriously, how often does anyone fully understand a product in 5 minutes or less?

An engaged and informed prospect is much deeper into the buying process, whereas a curious prospect is ready to take a first look.

You’re curious if the restaurant your friend recommended to you is really good. You’re interested in dinner. That’s the difference between the two. People buy dinner but are curious about restaurants.

And you’ll go to the new restaurant if you want to tell the story of what it was like going there. Buy the ticket, take the ride.

Going to the restaurant for the first time is like getting someone to agree to and show up to a first demo. Becoming a regular is like turning them into a customer.

How do you translate this into getting someone to agree to a demo?

You need to create a gap between what they’re likely interested in and what you have to offer.

It’s how you tell a story. The hero wants glory, and he sees where it is, but he doesn’t know exactly what will happen on the journey between where he stands and where he’s headed. That’s why we read the story, to see what happens on the way there and once the hero reaches the other side of the gap.

If you’re wondering, how do I apply this to a SaaS offering? – great question.

And they’re curious because of the gap between what they’re currently doing and what you’re talking about.

Think about what that gap is between where your typical customer is when she first talks to you and where she will be after she buys.

How can you articulate that? What story can you tell around it?

How can you frame the ride (demo) so your prospect wants to buy a ticket?

Once you can perform well enough to get ready to ask the prospect to buy that ticket and take that demo you have to ask them to buy the damn ticket.

How to close a demo is another post in itself, but let me leave you with one idea on what you can say. Yes, I’ve said this before – and if you’ve done everything right up until this point, if you’ve created a gap, if you’ve put on a bit of a performance, it can work.

Ask, “Are you curious enough to want to learn more?”

Because if you’ve done your job, it’s hard for the prospect to say no when she really wants to buy that ticket.