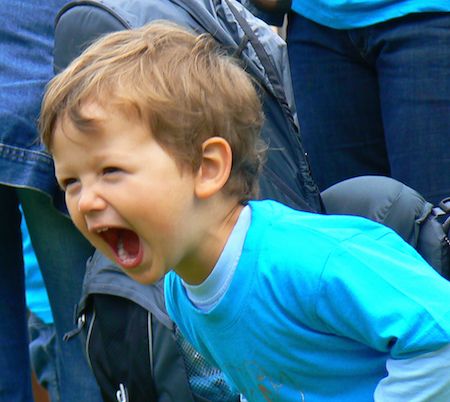 A lot of early career reps are afraid of getting hung up on. I know I was afraid of it in my first sales job.

I was sent to regional sales training after my first few months on the job. The trainer taught me some of the techniques I still use to this day. At that time I wasn’t thinking about all the amazing ideas, strategies, and techniques this trainer had shown me from his 20 years as a sales rep plus another decade of testing his methodology with current reps.

No, at that time I was focused on making better cold calls. I thought I was awful at them.

I didn’t mind it when someone objected to me because I could handle objections. Actually, I kinda welcomed them. At least if you gave me a half-hearted reason why you weren’t interested I could act (fake) like you were no longer a prospect while getting a little more info, which would sometimes lead to a next step or even a meeting.

I simply hated getting hung up on.

If you think about it, getting hung up on is totally different than getting a tough objection.

Early on in my sales career I welcome tough objections. You know why? I knew when I had an awesome product in my corner, and I was confident that if this prospect didn’t want to talk to me the next one would.

A prospect would shoot me down with their best “we’re all set with that” and I’d get them talking. I can’t do that if the prospect hangs up.

When a prospect hangs up on me the call is over, and I felt awful. I realized it was because when someone I personally know hangs up on me, we were having a shitty conversation that ended harshly.

The other end of the line is suddenly dead. How does it make you feel when the people you care about hang up on you?

Not good. Not good at all.

The problem is we project this feeling onto our sales calls.

When someone hangs up on you during a sales call, it’s not personal. It’s nothing like someone close to you hanging up on you, except the call ends abruptly. I’ll get to that difference in a moment.

It took me a couple years to get over that fear. I wish I could have happened overnight. What I can tell you is that I know precisely why I stopped being afraid of prospects hanging up on me.

A few years later I cofounded a startup. What that really means is that two investors put money into a man’s promising small business and they found a young sales rep to build up a customer base and run the company while they focused on fundraising. I was the young sales rep they brought on board.

On day two my boss picked up the phone, cold called a prospect using my name, and then handed me the phone to make the next call. Talk about pressure. He listened to me talk to my first prospect and when I hung up he looked at me and said, “Well, now I know you don’t suck at this!”

Small steps, one at a time, right?

Even with most of the business riding on my back I quickly became a more relaxed, focused, and unfazed sales rep than I ever had been before.

When a prospect hung up on me I moved to the next one.

When someone shot me down and I kept the conversation going I did everything I could to learn more about his situation, because it might help me on my next call.

I knew no matter how good or how frustrating each day was that I’d either sell more or figure out a way to sell more tomorrow. I was in the zone.

Here’s how you find that zone for yourself.

The first thing you need to realize is that talking to someone you know on the phone and making a prospecting call are two entirely different things.

This is often much harder than it sounds. It gets easier with time.

When you call a friend or a family member on the phone you already have an existing relationship with that person. If you get in a heated discussion and someone hangs up the phone? Not good. You have to see that person again. You start wondering if he’s going to tell your friends about it, if she’s going to tell your family, and everyone will hear the other side of it first.

When you call a prospect on the phone you’re starting from zero. Which is a great place to start. See, if the prospect hangs up on you then you’re still at zero. You haven’t moved forwards or backwards.

Now you might wonder, “won’t the prospect remember me next time?”

I’ve been on both sides of those calls. As a sales rep I know I’ve called on prospects who hung up on me or said “no” months ago, sometimes only a week or two ago, and that second time around was completely different.

Let’s go back to my first sales job for a moment.

After I had been in the field for six months I started calling in prospects who had shot me down early on. Not only did a number of them talk to me, some became customers over the next few months.

My boss had told me this is the way things would work. He was right.

It’s why I’m telling you this is the way things will work.

Know that prospects aren’t hanging up on you. They’re hanging up on just one call. Getting shot down hard allows you to focus on other prospects who might be a better fit right now. This leads me to my second strategy.

When someone hangs up on me I immediately say “Next!” as I get ready to call the next person.

I say it because it makes me smile. There are tons of people who could buy from me, why focus on just one of them?

I also know that someday that prospect is going to be the next one I reach out to.

By having a small ritual that helps me move on from the call and get ready for the next one I don’t dwell on the end result. I will take a moment to take notes if anything specific happened that’s worth remembering or thinking about for my next call. Otherwise why bother thinking about it? The call is over, and I’m glad it’s over. Time to get on to the next one.

Now, sometimes the prospect goes for the kill. Just unleashes a brutal reply. Have you ever had a prospect unleash an attitude and get rude to you? It’s like they woke up in a horrible mood and decided to take it out on you.

Well, have you ever thought maybe that’s what really happened? The prospect was in a bad mood and you were the person he took it out on.

When a prospect is particularly rude I hang up and say, “Glad I’m not you today.” And at that moment I feel a little sorry for the prospect.

Odds are they were yelled at by their spouse, or boss, or their project was just ruined in a meeting. There are very few people who are always rude over the phone. Yes, I caught the heat. I get to move on to the next account, but does the prospect get to turn the page as easily as me? Probably not.

Even though it might feel like you’re the one who got kicked hard, in reality you got nicked. The person who’s hurting the most hung up on you.

The biggest thing to remember is to not take it personally. It’s so important to remember that I had to say it again. Not having any relationship with you and not having to see you – your face, your expression, your reaction – makes it so much easier for a prospect to unload on a cold call.

What strategies do you use to get over getting hung up on before making your next call?